2030 Vision for Isle of Wight launched 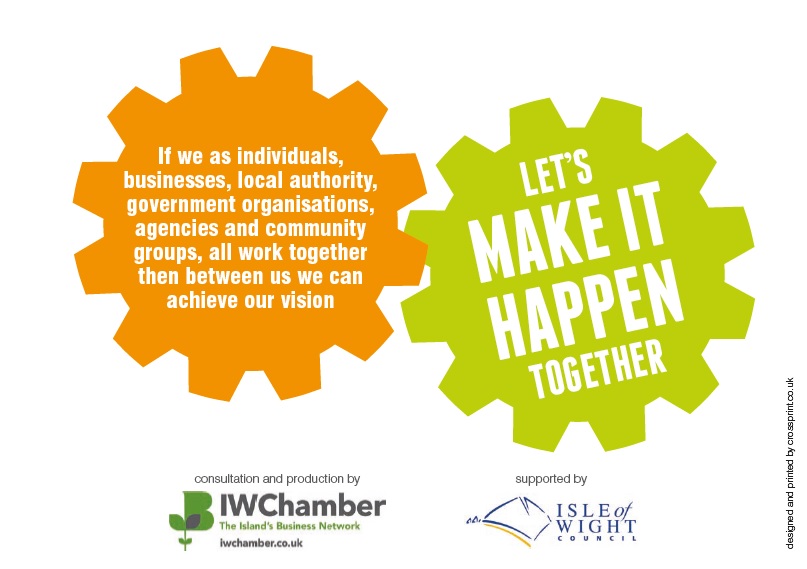 The Isle of Wight Chamber of Commerce has launched a vision document, designed to increase the economic and social wellbeing of the Island. It firmly positions the Isle of Wight as a great place to live, work and do business. The document channels a clear, positive message about the Island, aimed at promoting a shared vision of the future for residents. This cohesive vision will spotlight the Island as a unique place to do business within a vibrant lifestyle, a message that will encourage visitors and investors to choose the Isle of Wight in preference to other parts of the UK. 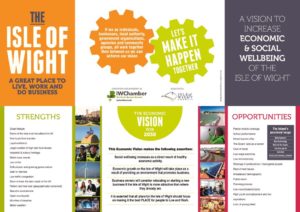 Key messages from the vision:

The Economic Vision for 2030 has been informed by the views of Chamber members through their business representatives. The manifesto for the future of the economy addresses the challenges presented by the Island’s “perceived image”. For a non-Islander who might think the Isle of Wight is “only tourism… no technology… behind the times… hard to get to or isolated” it presents the Island as a business destination with unique, often beautiful geography. It sets out the Island as a safe home to raise a family and with proximity to London. By channelling a consistent, positive message to boost the economy and attract more high value high paying jobs, the vision will help to re-engage all parts of the Island’s community and to regenerate our public realm.

The Chamber’s President Geoff Underwood says it’s the right time to launch a vision for the Island’s future.

“We want to continue to drive investment and awareness of the Island. The Chamber has always played an active part in the Island’s economy, and more often, led the way. What became clear though was a lack of vision to unify many elements and players. Plans are all very well, but without a coherent vision there’s nothing to tie it all together.

“The Island is home to many great businesses, often operating all over the world. My own business IFPL is based here and the Solent has been no barrier to our success. We’ve won The Queen’s Award for Enterprise twice and our customers are all over the world. I’m often in California but I love the lifestyle of my Island home. If we can ‘sell’ the Island to others because of its unique lifestyle then we’re on the right track to encouraging investment and economic growth.

“From an industry point of view, we believe that it will be knowledge based industries and high value tourism that will lift the economy. If we as individuals, businesses, the local authority, government organisations, agencies and community groups all work together then between us we can achieve many of the elements referred to in the vision for 2030.”

The vision for 2030 begins with the Island’s many existing strengths. We have some of the best rural broadband in the UK and the PFI project will deliver some of the best roads in the UK. The Island has a loyal workforce with a large number of high tech businesses. There’s an industrial and a cultural heritage, with an enthusiastic and growing green culture. The vision also highlights the crucially different lifestyle on offer here, making the Island particularly attractive to city-based businesses, potentially able to relocate. The Island is one of the most beautiful places in the world, with 60 miles of beaches and rolling open countryside as well as great weather. We’re home to world class events, from Cowes Week to the Isle of Wight Festival.

The vision is also designed to open up debate about opportunities for future growth and improvement. It recognises that the Island currently has a low skill, low wage economy with a mixed tourism offer and a shortage of professional / managerial people. The Solent is perceived to “act as a barrier” and the Island suffers from high youth unemployment, often losing young talent to the mainland. These issues can be solved by encouraging new investment that grows the Island’s economy.

The Chamber’s 2030 Vision has already received the backing of the Isle of Wight Council’s leader Dave Stewart and it has been welcomed by the Island’s MP Bob Seely.

Kevin Smith, the Chamber’s Chief Executive, explains more.
“We started by talking about all of the brilliant things that the Island has to offer. It’s a great place to live and work, with natural beauty and a safe, family environment. Lots of people understand that already but we wanted to share that message beyond the business community. The aim of this vision is to get the wider community to share the same language. As an Island we can be quite critical of ourselves and I think it’s time to start talking the Island up, with shared common messages.

“If we all talk a common language about how great the Island is then that starts to attract interest from other places and areas. Money and investment will soon follow and that brings further wealth and prosperity to the Island. We want to build on that opportunity, showing potential investors why the Island is a great place to invest. We want to make it easy for businesses to relocate here, making the planning process easier. The Island isn’t perfect, and we know that some of the areas we’ve highlighted will start and encourage wider debate. We have to understand our weaknesses in order to improve on them and this vision should be seen as a positive challenge. School performance has been consistently below par and we want to look to build the educational base on the Island and lift the low wage economy. We can only do that by highlighting the great stuff first and building on those strengths.” 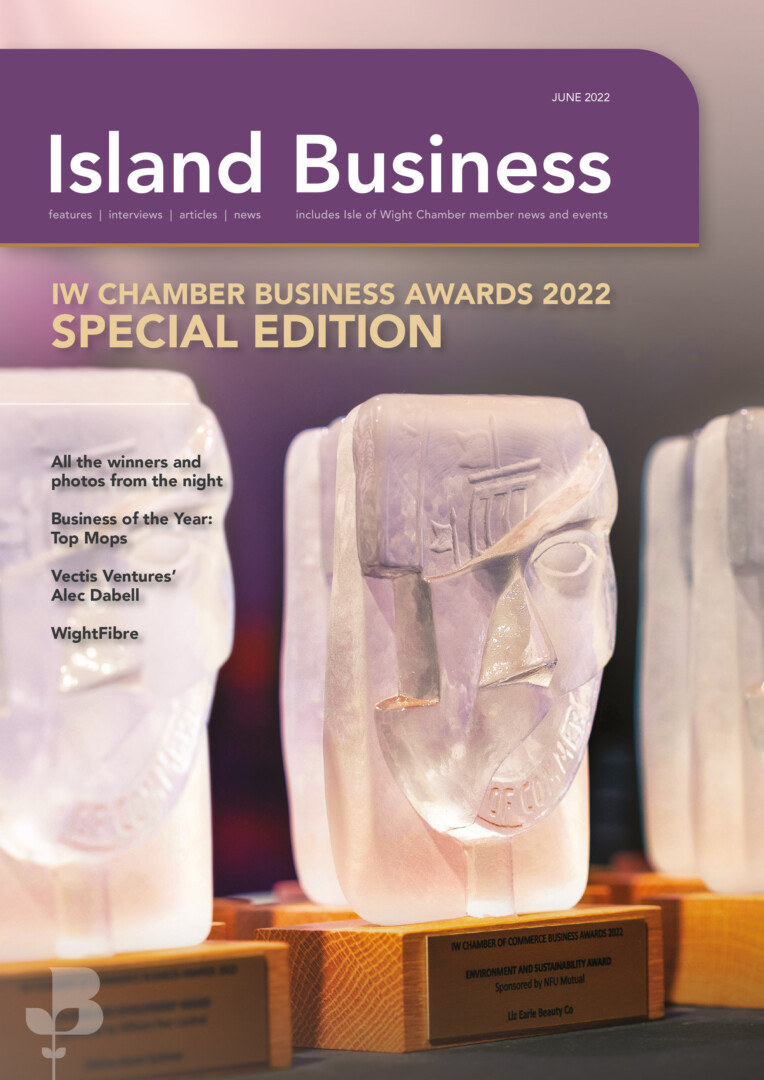 Thursday 7 July 2022 Quarr Abbey, Ryde 2.30pm - 4.30pm IW Chamber Members - £5 admin fee We are delighted to invite you to a fabulous afternoon tea at Quarr Abbey. This is a unique

We are delighted to invite you to a fabulous afternoon tea at Quarr Abbey.
This is a unique chance to be networking while enjoying the peaceful surroundings and a enjoying a cream tea in the garden. Plus a chance to find out more about the Abbey. We would welcome every member to bring a non member/client to this event

Tuesday 12 July 2022 YMCA, Shanklin 9.00am – 4.00pm IW Chamber members - £65 +vat per person This one-day course is designed to give delegates the knowledge, skills and confidence to help those that

Friday 15 July 2022 1.00pm - 2.00pm IW Chamber Members  Only ! The Island’s MP joins us for an opportunity to share your perspective on business. Bob Seely wants to hear from IW

The Island’s MP joins us for an opportunity to share your perspective on business. Bob Seely wants to hear from IW Chamber members about the issues facing your business, as part of a regular members-only forum. It’s a chance for you to directly share views, report back and ask questions. Spaces are limited for this popular forum and please keep your own feedback brief to ensure that all members get a chance to speak during this busy hour-long session.

Join IW Chamber and our sponsors Red Squirrel Property Shop for fun, informal networking at our annual Cowes Week Summer Barbecue. We’re at the Island Sailing Club, overlooking the action on the water, where you can soak up the atmosphere with a locally sourced barbecue and unlimited drinks, including Mermaid Gin. This is popular event with fixed capacity so book early to avoid disappointment

Friday 5 August 2022 Liz Earle, Nicholson Road, Ryde 7.30am - 9.30am IW Chamber Members - £16.00 per person Join us for a delicious hot breakfast and the opportunity to network with other members.