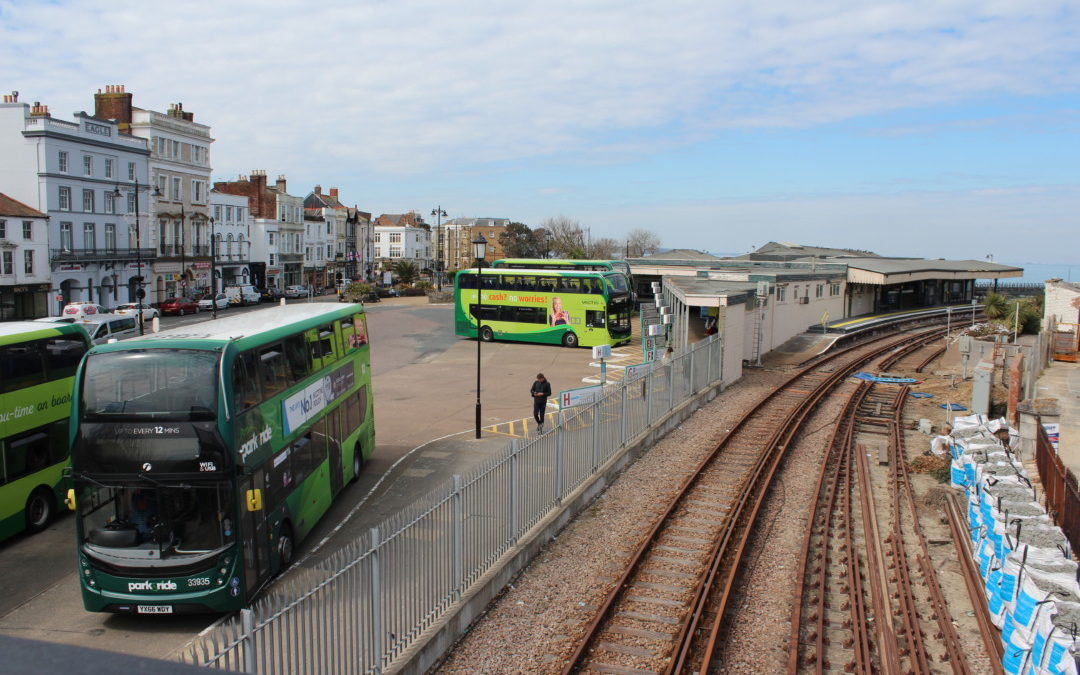 Islanders are being asked to help shape some of the key elements of a multi-million-pound project to improve Ryde Transport Interchange in a consultation that launches today (Tuesday).

As part of the project, facilities and connectivity for cyclists, pedestrians, bus and rail users as well as Wightlink FastCat passengers are all to be improved, with the transport hub reorganised to provide a more pedestrian prioritised area with additional areas of public use.

The scheme is supported by a government grant from the Transforming Cities Fund following a successful bid by the Isle of Wight Council, Portsmouth City Council and Hampshire County Council (together as South East Hampshire Rapid Transport or SEHRT) for £55.6m million, £10 million of which is earmarked for the Ryde Transport Interchange improvements.

Complementary improvements are also being made by Southern Vectis, Wightlink and South Western Railway who are all partners in the project. The Ryde scheme is part of a wider, co-ordinated initiative to enhance sustainable transport infrastructure and connectivity in and around Portsmouth (Portsmouth City Region).

The project will transform the old tramway along Ryde Pier into a new pedestrian and cycle boardwalk. There will also be improvements to Ryde Esplanade railway station including the refurbishment of the terminal building to create new fully accessible toilets and remodelled, expanded concessions as well as access to the boardwalk.

The bus terminal will also be re-modelled to provide a safer environment for bus users/pedestrians with more public amenity space. A new road layout will also allow buses to emerge from the bus terminal and head straight up George Street, as opposed to the current arrangement where they have to use the roundabout at the end of the Esplanade.

The project will also create a dedicated cycle route and walkway through the area linking Ladies Walk to the west and Puckpool to the east providing more areas of public use with new street furniture.

As well as providing better connectivity and promoting active travel, the project also aims to make the interchange a more pleasant public space for both those arriving at the gateway to Ryde and those wanting to enjoy the area as a destination in itself.

Consequently, additional trees and shrubs will be planted, there will also be additional public seating as well as more space that can be safely accessed by the public. There will also be enhanced pedestrian crossing facilities and the area will be opened up to improve views of the historic pier.

The council is now holding a consultation to share the details of the plans and seeking feedback from the community on the key elements which define the look and feel of the area including landscaping and planting, bus carriageway surfacing, kerbing, pedestrian paving and seating.

The council is also interested in receiving feedback on other key features which could be incorporated into the public space while respecting the local heritage, wider natural environment and conservation area status.

Councillor Phil Jordan, Cabinet member for transport and infrastructure, said: “It is fantastic news that SEHRT has secured this significant investment on a scheme that will improve the interchange and the wider Esplanade area both as a transport hub and as a public amenity area to enjoy.

“While some elements of the project are tied to conditions of the grant money, there is nevertheless scope for the public to help refine the plans for the public realm.

“There are important decisions on the character of the interchange to be made. For example, does the community want it to have a more traditional feel in keeping with other areas of the Island or is there an opportunity for something more contemporary? Do people want seafront themed planting to complement the existing palm trees, or something more traditional involving native species?

“This public consultation will play a big role in shaping the ongoing dialogue we are having with local stakeholder groups and help us finalise a scheme that is a credit to Ryde and marks a step towards our ambitions of regenerating the wider area by creating a fully integrated, user-friendly gateway transport hub.”

The council will also continue to seek the input of key groups like Ryde Town Council, Ryde Regeneration Group and Ryde Business Association to ensure they also have an opportunity to input their views as local representatives.

The findings of the consultation will inform a decision on the way forward.

It is hoped work on the project can start in early 2022 and be completed in Spring 2023.

The survey runs until 3 August and can be accessed online via the following link www.iow.gov.uk/rydeinterchange 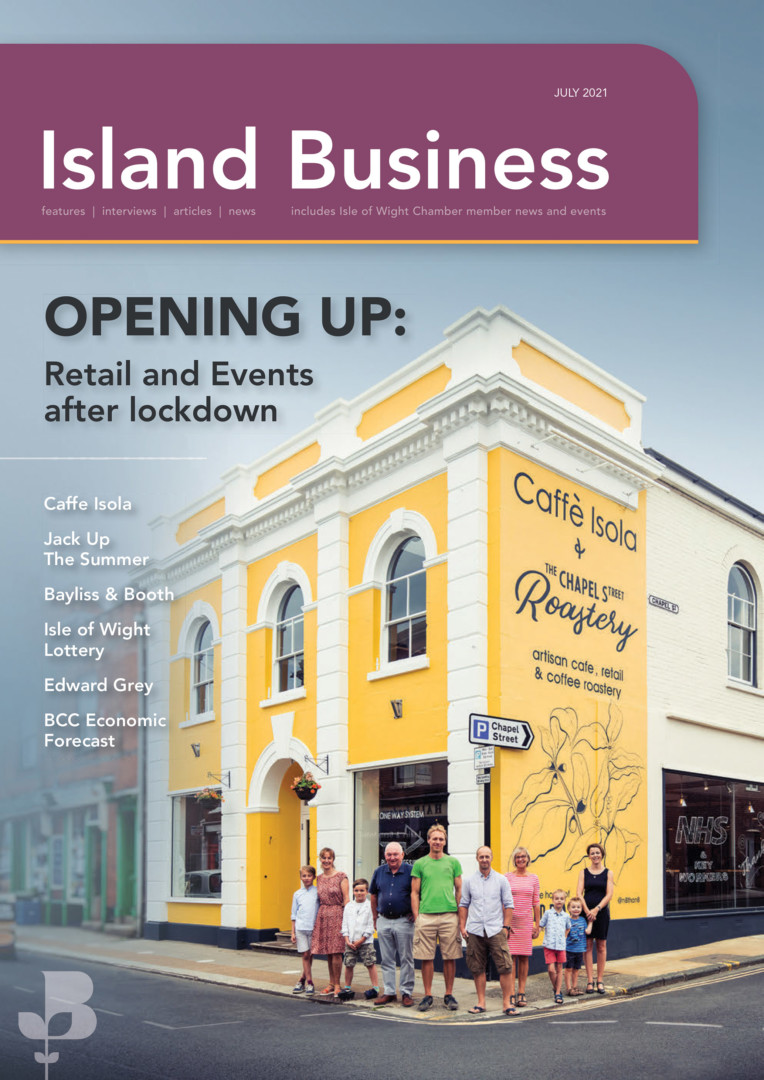 £60 +vat per person (this includes the certificate and manual)

Measures have been put in place to consider the risks of Covid-19. This includes social distancing (where possible), individual gloves, maks and anti-bacterial gel – all provided by Good Skills Training (you may of course bring your own) and revised training and delivery techniques.

Join IW Chamber and Red Squirrel Property Shop for fun, informal networking at our annual Cowes Week event. We’re back at the Island Sailing Club, overlooking the action on the water. Soak up the atmosphere with a barbecue and the house bar is open all afternoon, including Mermaid Gin.

Join us for a fabulous evening of networking and coffee at Caffe Isola on Thursday 19 August, 6.30pm-9pm.

Located in the historic former Beavis and Congregational Church lecture hall, is the home of Island Roasted – true artisan coffee, hand roasted here on the Island.

As both a local producer and successful cafe & retail business, come along to hear all about their journey in coffee and business (including Great Taste Award, Finalists in the Family Business of the Year 2021, IOW Radio Winner for Overall Business of the year 2018 and they are Nominated for Best Cafe, Best Shop/Retail Experience and Best Local Produce in the Red Funnel awards 2021).

There will be an opportunity to watch live roasting demos to see what it takes to produce truly high quality coffee. You will also get to taste some of the diverse flavours to be found in specialty coffee, peruse the array of retail products produced by a range of local craftspeople and see the brand new coffee training room at Caffe Isola.

£15 per person for IW Chamber Members. This includes a welcome drink (alcoholic and non-alcoholic available) and a flavoursome Italian stuzzichini buffet enriched with fresh and seasonal Isle of Wight ingredients.

Tuesday 7  September 2021 Caffe Isola, Newport 7.30am - 9.00am IW Chamber members - FREE Meet members for informal networking in a great location. It’s free to attend, with hot drinks and toast for

Wednesday 8 September 2021 YMCA, Shanklin 9.00am – 4.00pm IW Chamber members - £65 +vat per person This one-day course is designed to give delegates the knowledge, skills and confidence to help those that

Thursday 9 September 2021 11.00am - 12.00pm Via Zoom Chamber Members Only ! Since the end of the transition period the UK government has signed trade agreements with over 80 countries and has the

Since the end of the transition period the UK government has signed trade agreements with over 80 countries and has the aspiration to agree a deal with many more including Australia, New Zealand, India, the USA as well as to accede to the CP-TPP. Governments make trade deals and businesses make trade.

In this webinar we will aim to help businesses understand what these agreements can mean for their international trade plans. Whether you are an importer or an exporter, tariff free trade can increase your competitiveness, margin, and market access opportunities. Our experts will provide guidance on what to look for, selecting great markets and winning competitive advantage.